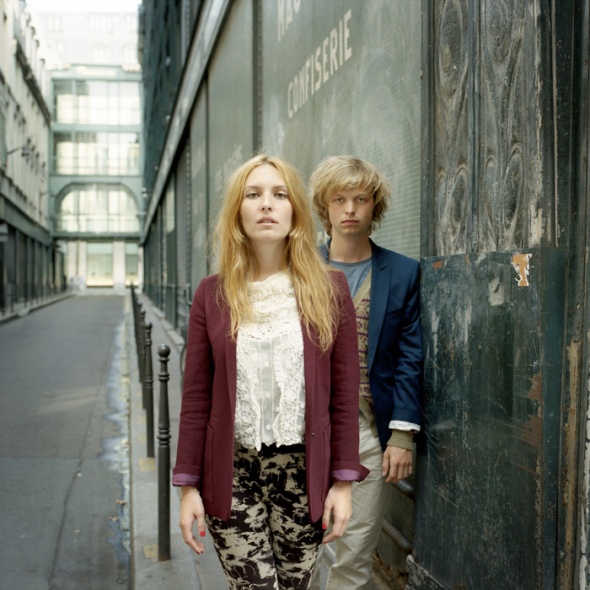 Say bonjour to up-and-coming French indie-pop duo Singtank. Even though the band of Alexandre and Josephine de la Baume is still in early stages, they are gaining attention for being wicked cool by association. The sister, actress/singer Josephine, is in fact Mark Ronson‘s wife, and has been touted by Kate Moss and Daze & Confused magazine as the next big thing. Their first single “The Party” is pretty standard as quirky indie-pop goes, with the brother on lead vocals and Josephine providing harmonies. It’s a fun, catchy ditty that reminds me of another boy/girl duo, The Dø. The video is visually arresting in an Alice in Wonderland meets M.C. Escher way. It’ll be interesting to hear more from them, apparently they worked with Bjork’s former producer Nellee Hooper. I wonder if they worked with Mark too, or maybe that’s too obvious?

Their debut album, “In Wonder”, drops May 7.
More on Singtank.

Last week, Mark Ronson & The Business Intl‘s member Rose Elinor Dougall mysteriously asked for Australian cover suggestions on Facebook. It turned out it was for Triple J’s “Like A Version” feature, and apparently rather than choosing a random SAW-era Kylie song “for the LOLZ”, the band took the cool route and covered Tame Impala’s “Solitude Is Bliss”, which by itself is a great swirling psych-pop jam. Rose and Andrew Wyatt (Miike Snow) took charge of the vocals. Listen to their take below, and get a bonus cover of Alicia Keys’ “Try Sleeping With A Broken Heart” featuring MNDR done for Live Lounge last year after the jump.