DJ Koze is a name I’m familiar with, having listened to his countless remixes and productions during my IDM phase a few years back. Apparently, the German DJ/producer just released his first solo album in 9 years entitled “Amygdala” (bonkers artwork above), with help from an all-star cast of featured vocalists like Dan Snaith of Caribou, Matthew Dear, and crooner-du-jour Milosh of Rhye fame. However, much to my surprise, track 6 featuring Ada is actually a cover of Kings of Convenience! “Homesick” is a lovely cut on their 2004 album “Riot on an Empty Street”, and Koze’s version does not stray too far away from the original. Just don’t expect any radical rave-up, for it’s a simple, laidback groove with mellow hip-hop beats and robotic, yet organic vocals. It’s already at the top of my essential summer playlist. Check out the breezy cover below.

Safe to say I need to queue up this album on Spotify, then. Love me some oddball European electronica.

“Amygdala” is out now on CD & LP via German label Pampa Records. Buy it on iTunes.
More on DJ Koze.

END_OF_DOCUMENT_TOKEN_TO_BE_REPLACED

NEW VIDEO: Kings of Convenience – Me in You 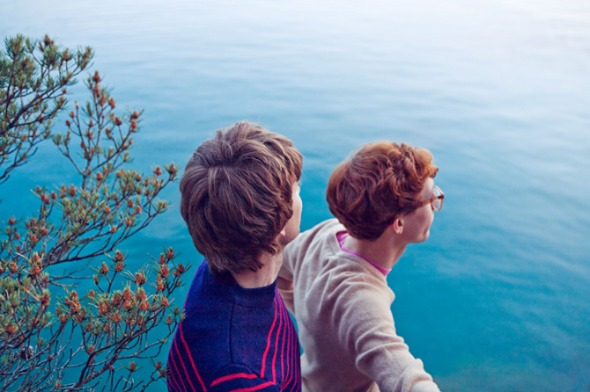 Are you still clinging to what little’s left of summer sunshine? Well, the new Kings of Convenience video won’t make things easier. Here’s what Erlend & Eirik have to say about this rather unexpected present:

“This song is from Declaration of Dependence, that was released almost 2 years ago. We thought it deserved a video and 2 weeks ago the weather-forecast was good. We called up our friends (who has got some rather advanced video shooting equipment) and made this one-take video, on top of Eirik’s roof. The audio is the album-recording of the song. Bergen is not always as nice as this, but it’s days like this that makes us want to live here.”


Now that’s a lovely way to bid adieu to summer.

For the occasion, how about a nice bonus b-side? Here’s their rare cover of Badly Drawn Boy’s “Once Around The Block”, originally released on the Toxic Girl single back in 2001. That’s 10 years ago!

MP3: Kings of Convenience – Once Around The Block (Badly Drawn Boy Cover)

More on Kings of Convenience.