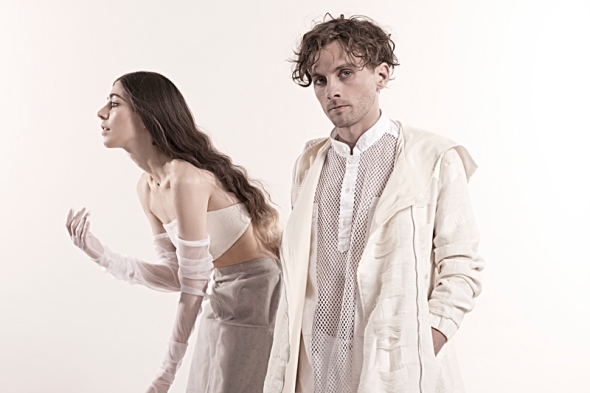 On a Saturday night in LA, only one day after their third and latest LP ‘Moth’ was officially unleashed onto the world, Chairlift performed an intimate show at Teragram Ballroom. The Brooklyn-based synth-pop duo of Caroline Polachek and Patrick Wimberly came on stage with the band at 10 PM to an adoring crowd.

Two songs in, Caroline realized the synthesizer’s sound wasn’t audible, so Patrick bought some time with some classic technical-issue banter, noting this was their first show since the record came out. Once that got quickly sorted out, the band launched into a fan favorite, 2012’s ‘Something’ cut ‘Sidewalk Safari.’ Caroline cemented her status as one of the finest vocalists (and captivating performers) of our times, pulling off pitch-perfect vocal acrobatics with such ease. The new batch of songs really came alive with their disco-lite, retro-funk R&B vibes, especially ‘Moth To The Flame,’ ‘Ch-Ching’ and ‘Show U Off.’ However, a clear highlight was one of the quieter moments – the gossamer ballad ‘Crying In Public’ in which Caroline sang about having a breakdown on a subway car. The inclusion of their breakout hit ‘Bruises’ got the crowd to sing along, and it stuck out, showing how much Chairlift has grown musically and artistically since then. The energetic set lasted a little over an hour, and even though there was no encore, everyone was applauding so much that the band came out again to say thank you and said sorry they had no more songs.

The setlist was culled from ‘Moth’ mainly, bar two oldies and one unreleased cut called ‘Get Real.’ It makes sense that they wanted to focus on showcasing the new materials live on this night, but I hope they will add more tracks from ‘Something’ for the spring North America headline tour. Check out the tour dates below, and grab your tickets!

END_OF_DOCUMENT_TOKEN_TO_BE_REPLACED

On first listen, the second track off Selena Gomez‘s ‘grown-woman’ “Revival” era didn’t seem up to much. “Same Old Love” feels self-consciously minimalist, and the Charli XCX-isms were distracting to say the least. Perseveringly, much like its predecessor “Good For You,” the song has its way of sneaking up on me. Maybe it’s the little details like the Sinnerman-esque piano riff, or the synths from Bowie’s “Ashes to Ashes.”

The music video premiered yesterday supports the argument that “Same Old Love” may be one the best things Selena has put her voice to. Directed by Michael Haussman (Britney Spears, Shakira, Justin Timberlake), the video follows the petite pop star on a rainy night out in LA. The treatment feels very ’90s (Madonna’s “Substitute for Love” springs to mind), as the moody visuals bring out the claustrophobic feel of the track. I suppose this whole post is just a long-winded way to justify liking this song, and yes, I’ve got my mind made up. Watch the sultry video below.

You shall enter the labyrinth.

To former readers of my old blog: worry not, the content will stay the same, albeit a little more pop-centric. Yes, there will be covers, and other goodies as usual. I will try my best to update this one more frequently. Promise!
To newcomers: I hope you will enjoy your time here. Check out the About page for more info on my taste in music etc.

I know there’s literally nothing here as of now, but that should be rectified soon.

I am so fucking excited. Let’s get this started!