Apparently, pop provocateur M.I.A. has been in the studio with the legendary William Orbit, and a song from their session sneaked its way upon the Internet last night. Entitled “Baby”, it’s an unexpected, but not entirely surprising pairing, as Maya has worked with pop-friendly producers like Richard X and Timbaland before. Hear the icy, minimal track below, before it’s taken down!

UPDATE: M.I.A. has stated on her Twitter that this is an unfinished demo for Madonna and is not for her new LP.

In more baffling Orbit-related news, the pop maestro also uploaded a new track on his Soundcloud yesterday, the synth-laden “All Fired Up” (not a Saturdays cover, sadly), featuring none other than Tina Barrett – well, she of “S Club 7” fame! It’s a bit on the cheesy side, while I do like the fizzy electro production, her vocals left a lot to be desired. A quick search revealed the track actually floated about on Youtube since 2008, so will it be on Tina’s forthcoming solo album? Will she be the one to threaten an S Club 7 reunion? The plot thickens.

STREAM: Tina Barrett – All Fired Up (Produced by William Orbit)

Also, he uploaded an instrumental version of the forgotten Nadine Coyle album track “Unbroken”. His instrumentals are always worth a listen for their intricate, pristine production, but really I’m just waiting for an instrumental of All Saints’ “Black Coffee” to be put up. I need that in my life.

In other news, the Madonna reject that Orbit gave away to Chris Brown, “Don’t Wake Me Up”, shot up to #2 last week on the UK Top 40. Blimey. 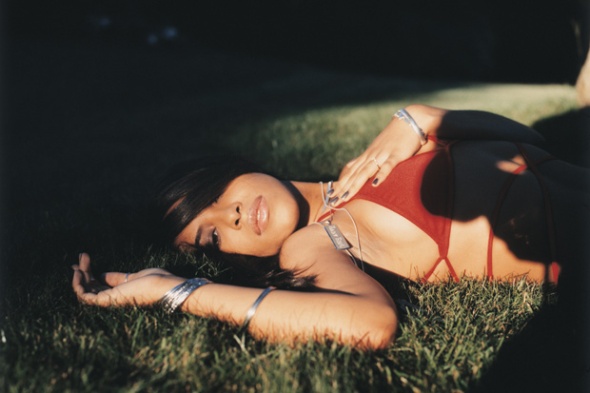 Reworking and sampling ’00s r&b hits into abstract electronic loops is the trend du jour in the postdubstep world nowadays. British bedroom producer Memotone is the latest to join the bandwagon, by recontextualizing Aaliyah‘s Timbaland-produced stone cold classic “Try Again” into a beat-heavy, cowbell-adorned number, while still retaining some of the hip-hop flavor. And it’s surprisingly replayable. The chipmunk pitch shifts are expected, but the drumwork here is really impressive. It couldn’t be released at a better time, as today would have been her 33rd birthday. Sometimes I do wonder how different the R&B scene would be if she were still around…

LISTEN: Lana Del Rey – Off To The Races

Can’t get enough of Ms. Lana Del Rey? Well, if you happen to live in the UK, Christmas might just come early, as the self-proclaimed “gangster Nancy Sinatra” has released brand new album track “Off To The Races” as the iTunes Free Single Of The Week. And if you don’t, no worries, I’ve got it right here for your sampling. The heavily hip-hop-influenced song is possibly her most bonkers so far, or as I’d like to call it, her own “Gwen Stefani moment”. Hate her or love her, she can make buzz like no other. The album really can’t come soon enough.


STREAM: Lana Del Rey – Off To The Races