Stine Bramsen of Alphabeat has officially kickstarted a solo career with her debut single “Prototypical”. Released worldwide last January, the toe-tapping track sees her leaning towards a more mature singer-songwriter direction, but worry not, the hooks are still very much present. A music video will be coming soon, until then you can stream the track right below.

I also made a late discovery of her collaboration with alt-rock band/labelmate Carpark North on their single “32” last year. I don’t know much about the fellow Danish rockers beside their striking Martin De Thurah-directed videos in 2005 for “Human” and “Best Day”, both of which were admittedly quite good Depeche Modesque tunes. It’s good to know the band still releases music in that same vein. In fact, I find myself liking “32” much more than I expected, thanks to Stine’s star-turn vocals. Then again, the Danes have always excelled at cold water music, like this subtly anthemic synth-rock jam (see also: Mew). Watch the moody video featuring a girl with superpowers.

Moving away from the lush, dreamy soundscapes of her second album, Oh Land returns with something a little more adventurous. For her third full-length entitled “Wish Bone”, the Danish songstress works with producer Dave Sitek (TV On The Radio). Her relocation to Brooklyn really shows in the new batch of songs. Lead single “Renaissance Girls” is a fun celebration of female empowerment in the form of an infectious synth-pop tune. The girl-power sentiment is cool in a post-Lilith-Fair way, and the immaculately choreographed music video is AMAZING. She really put her ballet dancer skills to good use!

There’s also a lovely new video for the quirky “Pyromaniac”. She’s really nailing it down on the visual side this era. Her hair alone is divine, I can’t tell what exact shade it is (light blue greyish blond?), but she rocks it.

You can now stream the entire album on New York Times. FYI, the track co-written with former tourmate Sia is “Green Card”.

Every now and then I come across a gem from out of the blue, and this is definitely a keeper. Kasper Bjørke is a Danish DJ/producer who has done remixes for the likes of Moby, Trentemøller and The Ting Tings. He also happens to look like Erlend Øye’s doppelganger. His latest single “Deep Is The Breath” is a fantastic pastiche of ’80s synth-pop in the veins of Human League, down to the male/female “call and response” -styled vocals handled by Jacob Bellens and Emma Acs. The melodies sound odd at first, but will eventually worm their way in. It’s retro-minded pop done so well, it could have easily come out 30 years ago and become a hit. Sweet one.

There’s a music video too but it’s quite boring, unfortunately.

Kasper Bjørke’s new album “Fool” is out now worldwide. Buy it on iTunes.
More on Kasper.

LISTEN: Fallulah – He’ll Break Up With You When Summer Comes 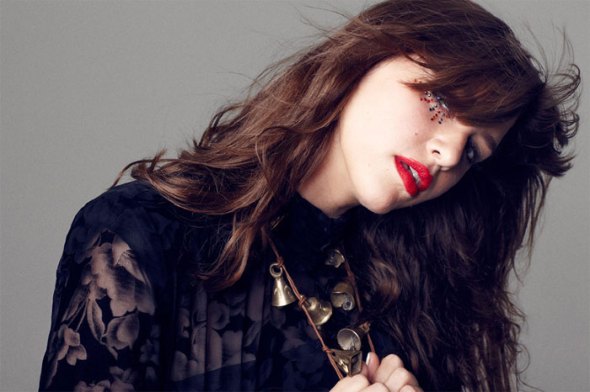 Danish songstress Fallulah is back with a brand new track, “He’ll Break Up With You When Summer Comes”. It’s a beautifully arranged, delicate alt-folk-pop number, with Fallulah delivering some choice words to Mr. Ex in the bridge in a rather calm manner. She makes summer postbreakup sound like a picnic by the lake, which is how it should be.

You can download the track for free here in return for your email address.

Here’s a lovely outdoor live performance for your viewing pleasure.

And while her new album isn’t coming out until 2013, us Americans can finally get a hold of her debut, as “The Black Cat Neighbourhood” is set to drop on August 21 on MBM Records, with fall tour dates to follow. I’d love to see her when she stops by New York!

LA-based DJ Skeet Skeet just dropped this hot new remix of Oh Land’s “White Nights”, and the title could not be more accurate. It’s all chill, summery ’80s disco, I can almost picture a Miami Vice montage set to this. Apparently, he put this together while they were touring alongside on Katy Perry’s California Dreams tour. Grab a free download below and add it to your spring break/summer playlist!

Darkness Falls is the Danish indie rock duo of Josephine Philip and Ina Lindgreen. Together they created “Alive In Us” – their first album released in late 2011 with production handled by Trentemøller. They remind me a lot of their fellow Danish rockers Mew, and for good reasons too.“The Void” is the single to discover, a prime example of just how well the Danes understand atmosphere in music. Instrumentally, it’s flawlessly produced – chilling, brooding, and melancholic. However, it’s not without flaws. It feels like the vocals didn’t maximize the ethereality it could go for, and the lyrics left something to be desired, beside its English-as-second-language charm. Regardless, it’s music that pertains to a certain kind of mood and weather, and a Saturday rainy morning is just the right catalyst, not to mention that the gorgeously-shot music video is a must-watch.

Their album is available for streaming on Spotify, so I’ve got my homework cut out. Hopefully there’s more where this comes from.

Danish pop princess Oh Land just unleashed a jolly music video for her brand new single “Speak Out Now”. Shot in Copenhagen, the Sebastian-Birk-directed video has the songstress frolic through a beautiful botanical garden, flaunt her cheekbones in a forest, and ends with an evening dance by the lake, all in a day’s work. The gorgeously filmed, nature-themed visuals are a perfect match for the sprightly tune. Plus, who needs a comb when you’re a pop star!

“Speak Out Now” is out now digitally, and also available as a free download.
MP3: Oh Land – Speak Out Now

The music video for Oh Land’s “White Nights” has finally arrived, and it is so worth the wait. When I heard the directing collective CANADA was at the helm, and that she had a 5-day shoot in Barcelona, I expected a collage of trippy and stunningly-shot visuals. Well, it’s safe to say the end product is nothing short of astonishing. The Danish songstress took us through her fantastical world of glittery hands, headdresses, and impractical animal-head shoes! Apparently, her midsummer daydream consists of surreal scenarios involving lagoon jumping, forest frolicking, horse riding, and lots of dancing (her ballet dancer background certainly helps). I especially like the Kylie-esque bit when she does the robot. For me, the video feels like a proper old-school MTV music video, fast-paced, fun, refreshing, and delightfully bonkers. This is undoubtedly one of the best pop videos I’ve seen this year. I’m glad her label believes in her enough to commission this.

Her self-titled album is still one of 2011’s highlights for me. It’s a carousel of enchanting, whimsical magic-pop that you should not miss out on. To celebrate the video premiere, 2 free remixes of “White Nights” by Twin Shadow and Max Tundra are yours to keep after the jump.

END_OF_DOCUMENT_TOKEN_TO_BE_REPLACED

Danish songstress Fallulah stopped by Dermot O’Leary’s show on BBC Radio 2 yesterday to perform a live session, which included a special folky rendition of Yeah Yeah Yeahs’ “Gold Lion”. I never thought about how the song would sound like with banjos and accordions, but she and the band did a splendid job covering it! Apparently, her debut UK single is “I Lay My Head”, out in late August, and the album “The Black Cat Neighbourhood” should follow by next year, even though it’s been out in Denmark for a while now. She said she’s not even signed in Britain yet, but I suppose this will be rectified soon. Stream/download the cover below, and check out two of her latest videos after the jump.

END_OF_DOCUMENT_TOKEN_TO_BE_REPLACED

Danish songstress Agnes Obel has been on my radar for her beautiful piano-laden music, which comes highly recommended if you like Emiliana Torrini or Sarah Blasko. But tonight, I’d like to share a new remix for her single “Riverside”. Lulu Rouge amplified the quiet bleakness of the original with his throbbing, dark spin. It’s an understated and moody rework that’s meant for the night-time. You can stream/download the remix below. After the jump, make sure to stream the original, and get an mp3 of album track “Brother Sparrow”.