I was first introduced to First Aid Kit via their sublime performance of “You’re Not Coming Home Tonight” on Youtube. Two years have passed since then, the Söderberg sisters had gone on to release a debut album, as well as recorded a single for Jack White‘s boutique label Third Man Records, which is a quite impressive feat. While they surely both have grown and matured much, two things remain the same: their world-weary, melancholy folk harmonies, and their habit of hanging out in forests. Their upcoming sophomore album, “The Lion’s Roar”, was recorded in Nebraska, promising a full-band sound, and the lead single of the same name might in fact be the best thing I’ve heard from the duo so far. It still astounds me to hear these two Swedish girls sing the blues like they were born and raised in the South all their lives. Age and geography ain’t got nothing on them! If you’re a follower of the nu-folk wave of Fleet Foxes or Bon Iver, you’re in for a treat. Watch the gorgeous music video for “The Lion’s Roar”, or stream the radio edit right below.

The new single is out now. The album drops on January 24th, 2012 via Wichita Recordings.
More on First Aid Kit. 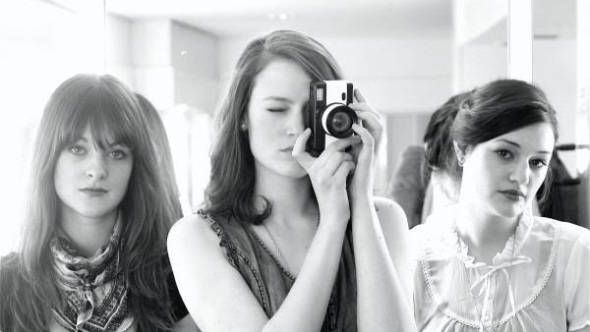 Pictured above are the three sisters from Watford, collectively known as The Staves. This British trio should soon be on every folk-pop fan’s lips with their debut album scheduled for release next year. If you like the likes of Laura Marling, The Pierces, Birdy etc., then their new single “Mexico” will most certainly appeal to you. Basked in a warm glow of harmonies, the song is a thing of understated beauty. The melodies tread lightly and unobtrusively, yet they draw my full attention and reduce me to silence every time. There’s not necessarily new ground to break, just beautifully crafted mellow music for your listening pleasure.
Watch the music video for the track below, and keep in mind that all the effects were achieved in camera!

The Staves’ new EP is out on December 11.

Download a free 2-track live EP here / Stream other tracks on Soundcloud.
More on The Staves.

UK’s pop-noir duo Alpines have joined forces with DJ/producer Maya Jane Coles for a spooksome cover version of Carly Simon‘s 1980 hit “Why”. They managed to turn the sunny reggae-lite original into a strictly nocturnal, bass-heavy trip. Expectedly, it’s moody and dark, but still quite danceable.

There’s no word yet on whether the cover will see an official release soon, but for now, in case you’re not yet familiar with the duo’s work, start with “Cocoon” or “Drive”. Check out the video for their most recent single “Cocoon” after the jump.

END_OF_DOCUMENT_TOKEN_TO_BE_REPLACED

I’m always on the look out for the next “it” British guitar band. It doesn’t matter if they all sound the same, with luck, one might come along with one great guitar-pop tune, and one at a time is all I ask for. However, up-and-coming London-based five-piece Spector has already exceeded that ratio by churning out 3 good singles in a row! The nerves. Their latest release, “Grey Shirt & Tie”, saw them switching gears for a more ’80s-inspired sound. At first listen, it seems lovely enough, if a bit restraint compared to their previous efforts, but it turns out to be a massive grower. What sets them apart from the much crowded deep-voiced blokey band pool is that they definitely don’t shy away from a catchy melody. With their namesake (which is, yes, named after that Spector), they’ve got a lot to live up to, but I believe 2012 will be their breakthrough year. Watch the quite nice video for “Grey Shirt And Tie” below, though I’m not sure if the Harry Potter glasses are a good look.

Watch the video for “What You Wanted”.

“Grey Shirt & Tie” is out on December 7 on Luv Luv Luv Records.
More on Spector.

Despite not having blogged about her at all, I have slowly developed a soft spot for Birdy, aka Jasmine Van den Bogaerde. The English 15-year-old has got herself quite a unique niche in delivering stirring covers of indie faves like Bon Iver’s “Skinny Love”, and The xx’s “Shelter”. With her debut self-titled album out on November 7, she is giving away a free download of album track “White Winter Hymnal”. Such good timing it is too, considering the Northeast’s unfortunately early winter this year. The Fleet Foxes cover boasts a fuller production than her more minimally arranged singles, and it’s a reliably lovely, soothing ditty. Download it below.

I must confess to thoroughly enjoying all her singles so far. There’s something special about Birdy that sets her apart from your average Youtube bedroom warbler. I like her quietly subversive practice of picking these supposedly low-key, marginally obscure indie songs, belting them out for the unfamiliar masses, and granting them new life as future X Factor audition staples. I couldn’t care less if her cover choices are of her own picking or painstakingly narrowed down in a dungeon somewhere by A&R monkeys. At the end of day, it’s melodies being beautifully sung, and that’s enough for me. I expect the album to be essential winter listening.

Watch the video for her latest single, a version of Cherry Ghost’s “People Help The People”, and peep the tracklist after the jump.